I often find myself window shopping for accordions. I especially like browsing the old Hohners and their kin. It's a functional hobby because in addition to admiring such instruments, I also collect and play them.

I've posted some photos comparing Hohner's Vienna-style diatonic boxes from the 1930s and 1940s. The following is an attempt to show how Hohner offered a diverse line of affordable two-row accordions. They used the same blueprint to reduce production costs, while altering small details like color or tuning to achieve variety. 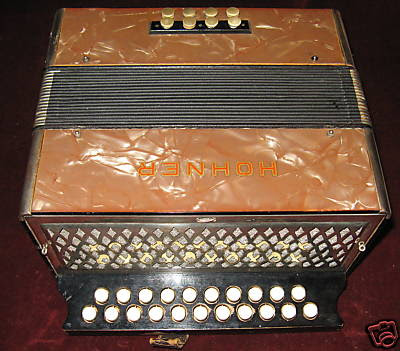 Above is a two-row Vienna box in CF tuning that sold for $212 in March 2009. That "horned" wooden keyboard is quite unlike the rounded plastic ones used on today's Hohners, but the grille is the same as on today's 2915 Pokerwork models. Also note the logo font and lack of any other graphics. From a forum post on melodeon.net, dealer Stephen Chambers stated that the first celluloid covered Vienna models appeared in the 1929-1930 catalog as model Nos. 120-180 and were offered in silver, gold, black, white, pink, blue, or green finishes. I have also seen two different colors of purple celluloid as well as red, orange, grey-green, brown, some different blues and something like fuschia so it seems that after 1930, more colors became available. 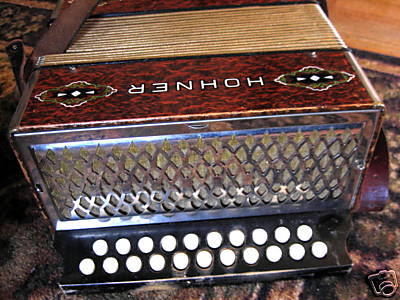 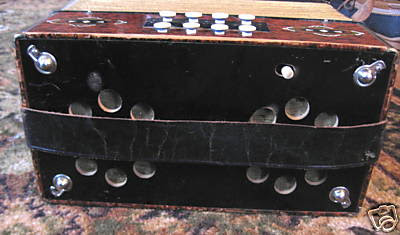 The model shown above is similar to the pink one except that the finish is a different color and it has some nice geometric designs flanking the Hohner logo. This combination of faux wood finish with geometric designs around the logo seems to have been widely distributed in North America because they're easy to find on today's used market. This one was sold in January 2009 for $112 requiring a retune, new pads, and new valves but otherwise in good cosmetic condition. It doesn't seem to have suffered from the damp, either.

A few words on dating conventions: basically, dating old Hohners can be tricky business. In the absence of documentation, an approximate date of manufacture is often the best you can do. Such an approximation may even be a 10 or 20 year period. To complicate matters even more, not even the people at Hohner are able to do it every time. Time and poor record keeping have taken their toll and some of the best work in this field is done by devoted amateurs. It remains an imperfect science, but there are ways to assign a more precise date to a given accordion. For example, the bass panel of the brown model shown above features four metal "feet" cast as single pieces that fixed the panel to the frame. Later models like the one below were built with four feet and four washers that were all separate from one another. 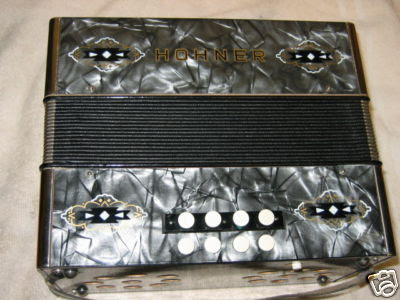 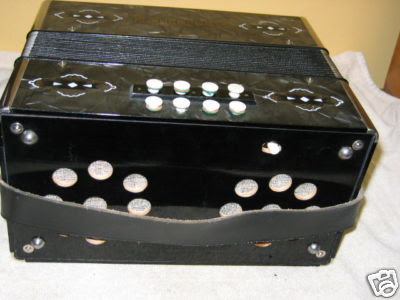 Here we go again -- above is the same basic design in different color. This particularly well kept example was sold for $200 in December 2008. The buyer really got a nice deal because the reeds needed only spot tuning and no cosmetic work. Note the separated feet and washers, and also the near pristine original leather and paint. It looks like it spent most of its life in the closet. Not even the cloth behind the bass panel has been compromised. 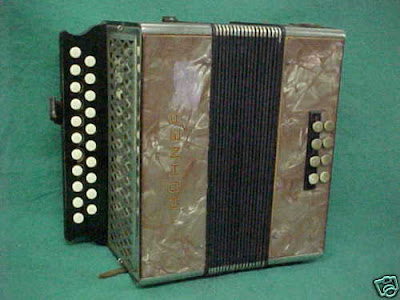 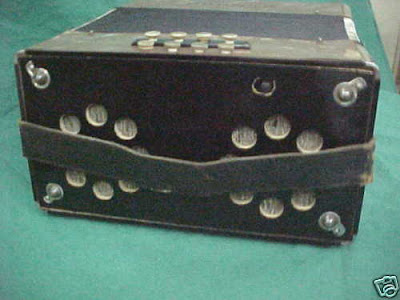 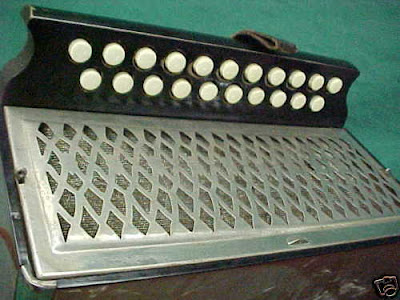 Here's one in purple celluloid that sold in December 2008 for $89. It needed all new straps, the celluloid was coming unglued, the bellows were torn, plus it required the compulsory reed work (if they were still serviceable). Overhauls are expensive but maybe $89 isn't such a bad price. There is more than that much value in the parts alone. Note the connected feet, plus common grille, logo, and basic design. 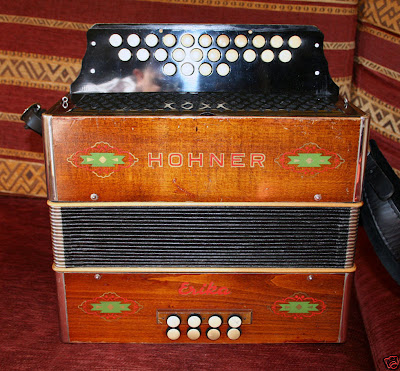 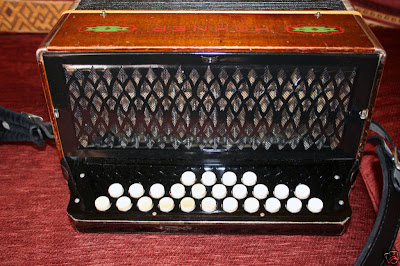 A familiar name and cabinet graphic adorn this stately old Erika (21+4). The combination of festive colors and stained wood give this box a bright summertime appearance. I had to include this instrument in the post. Even though it began life in Club tuning, it illustrates how Hohner's small stock of design characteristics were interchanged to produce a diverse array of instruments. The keyboard shape and design were shared with other Club models while the logo, grille pattern, and decorative graphics were common to other two-row diatonics. 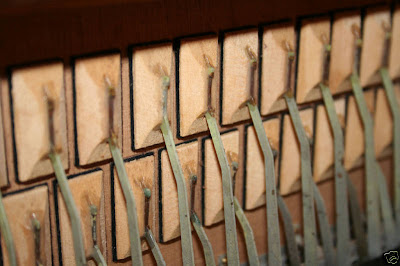 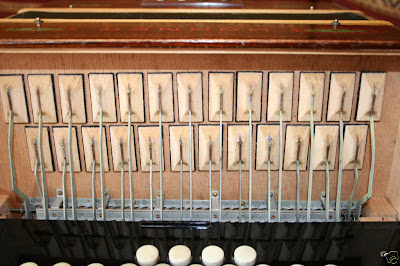 Note the gracefully curved edges of the pallets which are quite different than the clunky things found in today's Hohners. I don't know why they were cut differently but it seemes to have been done with greater care. Perhaps the old pallets were hand sawn? Or maybe new machines were introduced that straight-cut whole batches of pallets at the same time? Does anyone know? 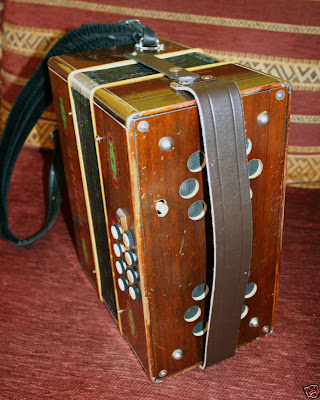 Unlike the other instruments featured in this post which all require restoration work of some kind, the Erika Club has already been fully restored. In the process, tuning was changed from original BEs Club layout (BbEb) to BC with reversals on the helper row. It was sold to a lucky UK buyer for about $310 back in December 2008. For a Hohner nut like me, that is an exceptionally good deal. For an Irish tuned box of this quality, it's practically unheard of. But don't you see - people think Hohners are better for the dustbin and they go out and spend thousands on other types of accordions. At one time, Hohner sat on top of the pyramid, making everything from entry level instruments to professional grades.

Caveat: while the separated feet *could* date it after the early 1930s, and this might be a reliable way of dating two-row Vienna boxes, I'm not quite certain if the same method can be used to date Club instruments.
Posted by Christopher at 8:05 AM