In the past, Hohner offered diatonic accordions in many different models and sold these in thousands of units. It doesn't take much practice to train the eye for recognizing the basic designs and distinguishing the most common models. Watching auctions on Ebay is a good way to practice, and it will pay off if you ever buy an old accordions because you will know which item is run-of-the-mill and which is truly rare or unusual. Some of the accordions in this post aren't necessarily rare, because they were mass produced and common enough in their heyday. But in today's market, some models are seen more frequently When I use the words "rare" and "unusual" I do not necessarily mean the accordion is better - just that it is different. Maybe you want a "different" accordion, or maybe you do not.

Here are some interesting models of which I have saved photographs.

The model below is Model No. 417, circa 1925. The illustration is from Hohner Catalog No. 700, which you can view on Frank Nordberg's Musica Viva website. The accordion in the photos below that was auctioned for around $120. 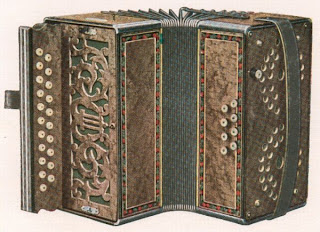 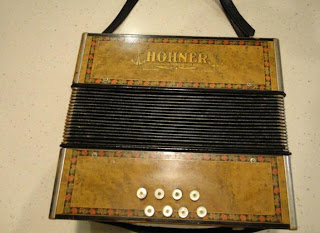 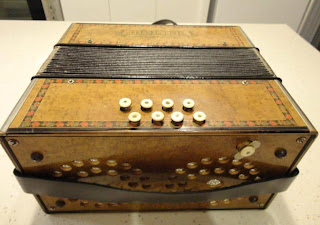 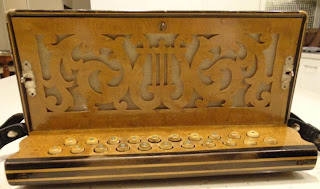 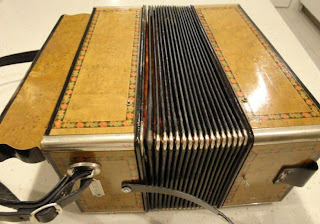 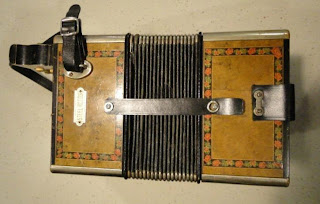 Below is a Model No. 424 that was probably built after 1930. It has a similar set of offset bass buttons but note the presence of the wooden bench under the inside row that is missing on the No. 417. This accordion was restored by Malcolm Clapp of Australia. I love the classy, flowing Hohner logo as well as the red facing on the cabinet edges and what looks like a strip of green celluloid applied to the edge of the keyboard. It's like an accordion wrapped in a green suit. Hohner was making some flashy machines back then! The catalog illustration is from Wurlitzer Wholesale Catalog No. 134, c. 1931. 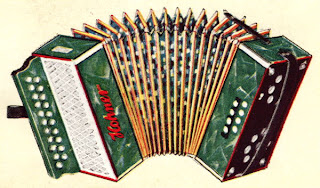 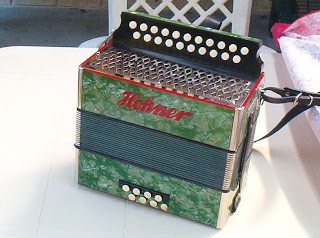 Below is another interesting accordion which is not terribly rare but isn't that common, either - a Corso from the late 1950s or early 1960s. You'll notice it is finished in classy, black evening attire with white stradella bass buttons. Usually, the Corso is found with 8 in-line bisonoric bass buttons and red celluloid finish. Note the recessed (flush) grille edges and painted graphics which are filled in and not just hollow outlines as found on later models. This accordion needs a glass of champagne! 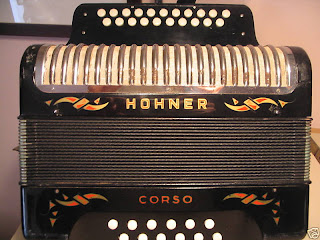 Below is a truly fascinating little novelty called the Hohner Echophone, Model No. 786. These used to come up for sale quite often on Ebay (practically for pennies) but now they're pretty rare and sell for considerably more money as a collector's item. It's basically a Hohner one-row with a fluted attachment like an old phonograph has. Visually, I think it's a grand idea and I'd love to have one. I can only imagine the carnage one of these will create on Ebay with melodeon collectors, musicians, antique dealerss, and steampunk cosplay people all clamoring to win the auction. In the same period, Hohner made a harmonica with a fluted horn attached to the end of it and this type of harmonica was recently reissued in limited quantities. One version of that harmonica was called an Echophone and another was called the Hohnerphone. The photo is taken from the website of Lester Bailey, an avid melodeon enthusiast and repairman. If you need melodeon maintenance or repair near Wendover, Buckinghamshire, try contacting Mr. Bailey. 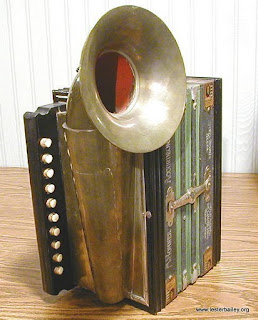 Here is a closeup of a catalog advertisement for the Hohner Echophone. Notice its chief selling point was increased "tone power" and the horn was detachable. If anything, I think such an attachment makes the accordion quieter. As for the "tone power" well, I'll call George Clinton if I need any tone power. Such a claim is also funny because Hohner was selling accordions with three and four voices, which are by design much louder, and this accordion only has two voices so it has to have been quieter. 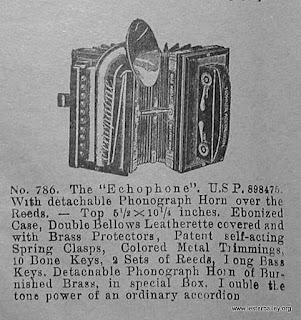 Below is another novelty by Hohner, dating from circa 1926. It could be an Echo, Model No. 7812, although the catalog photo taken from Hohner Catalog No. 700 (courtesy of Musica Viva) states the No. 7812 has 12 bass buttons, and these are shown in the catalog photo. The cabinet is painted like the Model No. 354 (or earlier Model No. 7812 21/8 G) but the dimensions and basic design are shared with other accordions. It has offset bass buttons with a bench under the inner row.

The intriguing part of this accordion is the treble keyboard which it is set up like a piano, with unisonoric treble buttons. The idea is pure novelty. It is hard if not impossible to play like a proper PA because the bellows and very small and it is difficult to use your thumb to hit the buttons. Hohner recycled the name Echo a few times for other accordions and harmonicas. 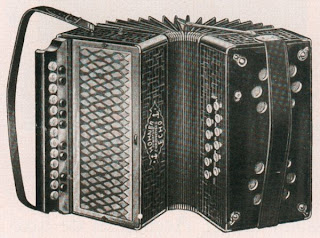 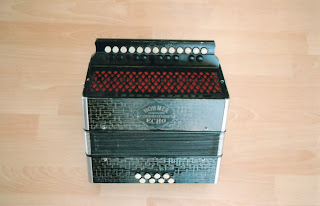 Last year, I purchased a similar instrument under the Venezia badge that actually has the 12 unisonoric basses. When I opened it up, I discovered it is fitted with steel reeds on aluminum plates of identical dimensions but bearing two different stamps - one stamp is from Hohner (H) and one from the Koch factory (attractive chamois). I'll show some photos of those in the future, but for now here is what the accordion looks like. I can affirm that it is, indeed, quite difficult to overcome the urge to play it push/pull style like a diatonic accordion and even more difficult to play like a proper PA. It's basically a one-row with some extra buttons so I'd like to refit it as a one-row diatonic accordion, changing the black keys into useful reversals or accidentals. Seems like a good idea, if I retain the original reeds without altering them. 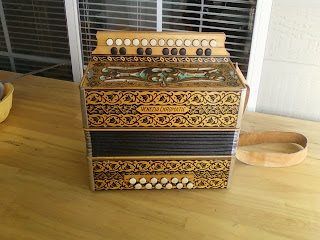 The last accordion in this post is a Hohner Recording King. These are not too easy to find. It's similar to the Corona. The grille is its most interesting feature. The pattern appeared on the Koch Ouverture and at least one other accordion under the Venezia badge. You can find these instruments in another Gumshoe Arcana post about Hohner accordions that were sold under different badges. 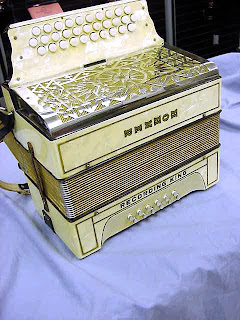 There are many more interesting instruments that could be examined. Hohner's wide variety of Club system instruments, for instance, are by and far the most luxuriously appointed diatonic instruments in the diatonic line and I'd like to do an entry about the more noteworthy Clubs floating around. Those will be fun to look at.

Until then, happy squeezing.
Posted by Christopher at 9:08 PM